Winemaker Dinner at the new Thelma’s and Luis 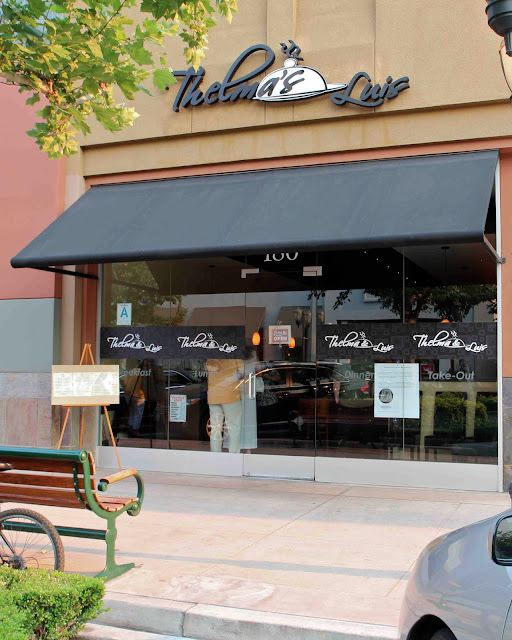 Devon and I went to the Valencia Town Center Shopping mall last Saturday to dine at Thelma’s and Luis new restaurant. The special winemaker's dinner was a hit and had a very good turnout. Eve & Eddie Bushman of Eve's Wine 101 greeted us at the door as we all met the staff and were seated at various tables around the new restaurant.
It was great to see Robert and Rosa Reyes, and Beth Heiserman, Marketing and Sales Director at Reyes.  Beth's also a gourmet chef who makes everything with Reyes wine.


We were happy to have a chance to talk with Chef Luis a few times and also to say hello to Thelma. 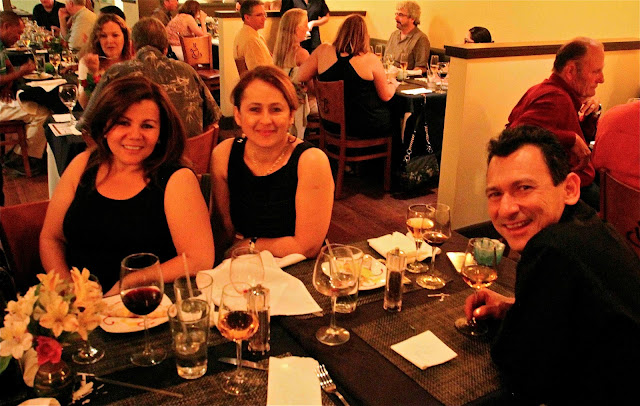 Our table near the front door (and #1 in the serving order) was next to our new friends, Laura and Larry Barbro, owner of HotSpotSCV. Everyone was very friendly and it was an enjoyable evening with an attentive wait staff. 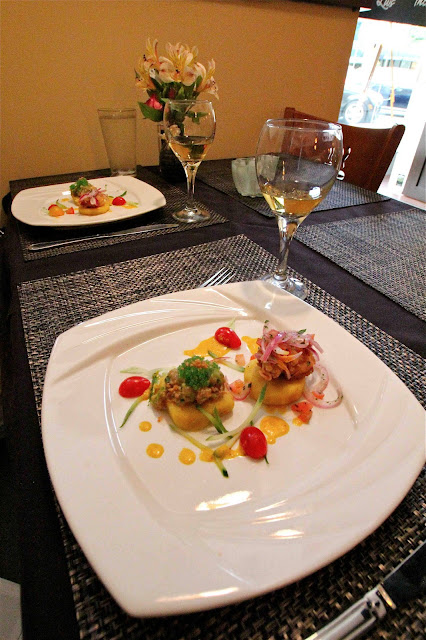 The first course was served on two Causa Potato Cakes. Apparently Causa is a mashed yellow potato dumpling mixed with key lime, onion, chili and oil and typically served with avocado, chicken, tuna or shellfish. Each plate had two different toppings. One was listed as Tuna Tartare and was topped with a bright electric green Wasabi Caviar, and the other mystery topping (not listed) looked and tasted like Shrimp Tempura with Red Onion. 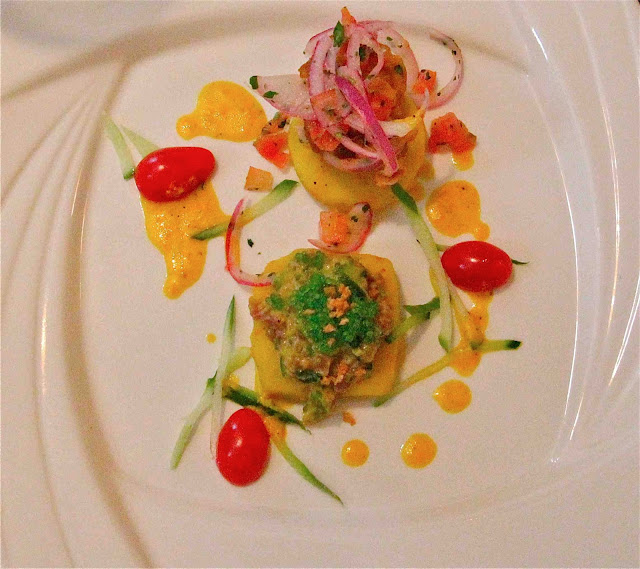 Both were very flavorful in different ways. I love spicy foods, but the Wasabi Caviar was probably a notch too hot for the general public and Devon wasn't able to finish her's because of the heat. Both paired well with the Reyes 2010 Chardonnay, but the wasabi did fight with the Chardonnay a little. The wasabi effect also lingered quite a while afterwards.

I was surprised by the second bottle of the Reyes Chardonnay poured after the first course - it was the 2011 (which I hadn't seen poured, so I was expecting more of the 2010). Even thought I didn't know the vintage was different, it was obvious that the second bottle tasted much more like grapefruit or a citrusy sauvignon blanc. I think the 2011 would have paired best with the Wasabi Caviar.

It seems like the Reyes Winery agrees with me about their 2011 Chardonnay, because their website describes it as exhibiting "unique tropical aromas with an exotic taste of guava and grapefruit. This wine can pair well with … a spicy Caribbean fish."

Later during the evening, Luis told me that I could find wasabi infused caviar in Little Toyko or at the LA Fish Market. I have to get some and try it with a Sauvignon Blanc, or maybe a Riesling. 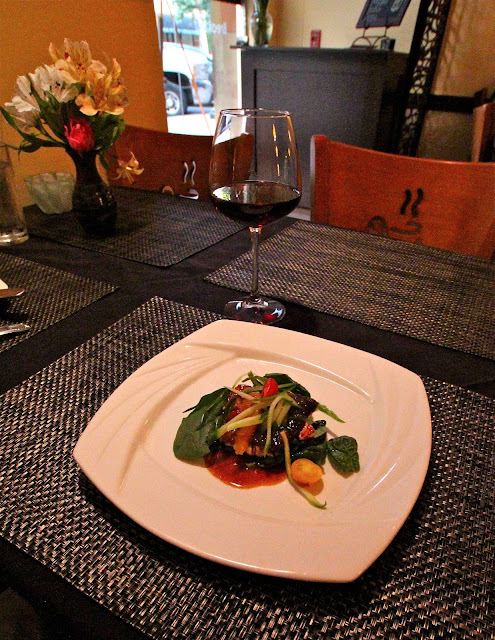 The second course of crispy skin wild King Salmon and a fresh cucumber salad in Zinfandel ginger citrus glaze was a real hit with Devon; she's the salmon fan of the family. I have to admit that I even liked the salmon because of the Zinfandel ginger citrus glaze! It really made the course interesting for me. Luis told us that he  used a sprinkle of curry, some Meyer lemon, and grapefruit in his preparation. 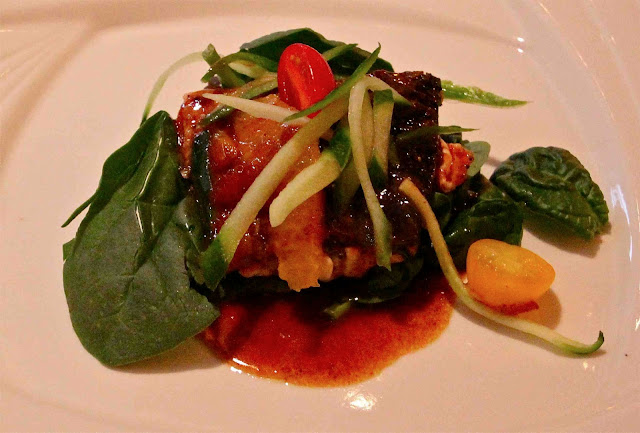 I was impressed that the paired Reyes 2011 Zinfandel was bottled that day and was quite smooth, not tannic at all, with spicy cherry notes in the nose, and it had a nice bit of minerality. 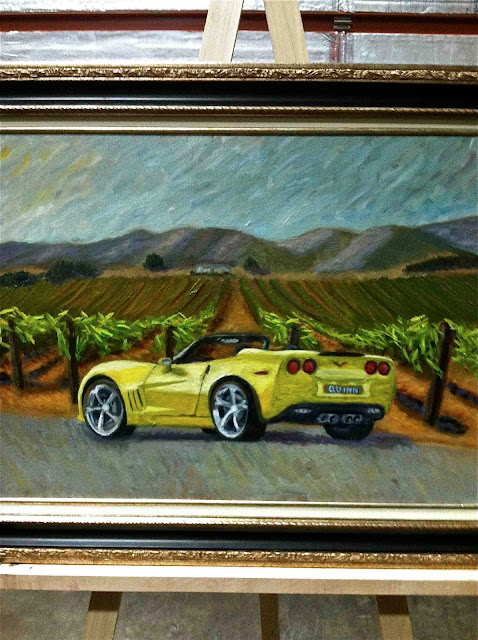 The Zinfandel also had an artistic label featuring artwork painted by Robert.  He explained that he painted this yellow Corvette for his grandson, Quinn, after they saw it parked at the winery one day. I suppose once you have a painting of a vineyard and a cool car with "Quinn" on the license plate, it's an obvious conclusion to name your next Zinfandel "Quinn's Zin" and use the painting on the label. It's an interesting mix of automobile, vineyard, grandson and wine and another aspect of the art of winemaking. 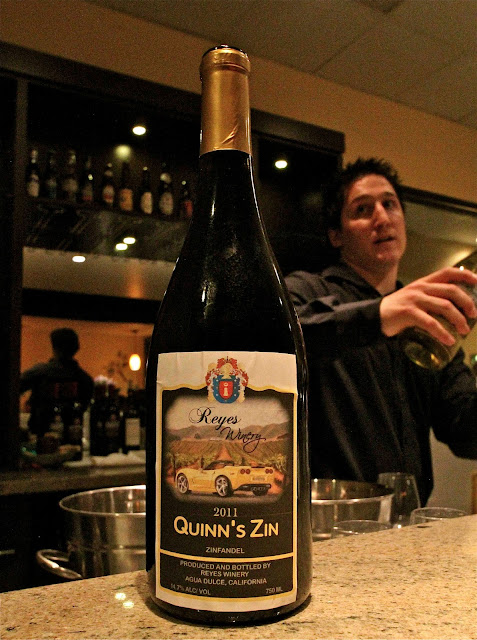 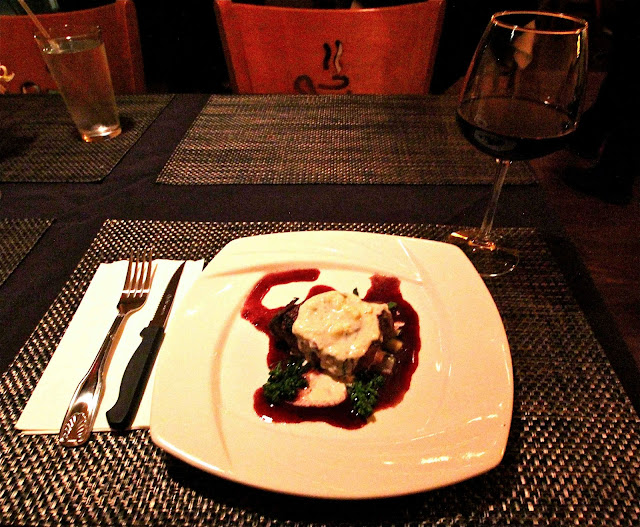 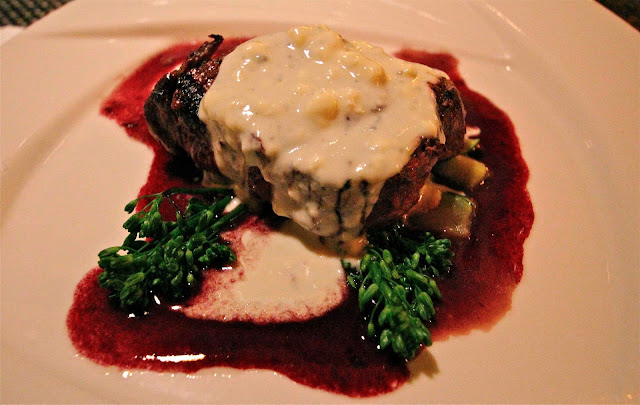 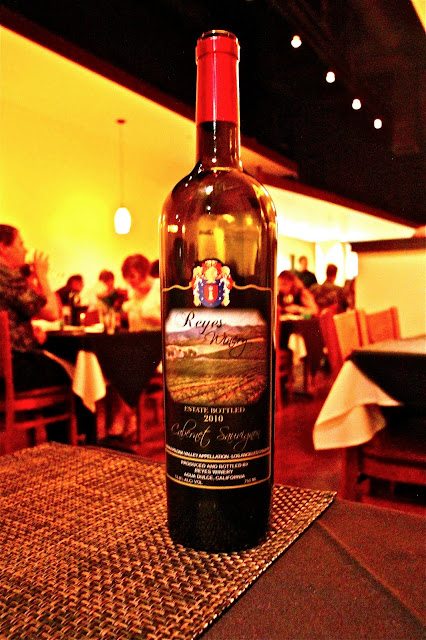 The 2010 Cabernet Sauvignon is the second "Estate Bottled" vintage from Reyes and has won a Silver medal in the 2012 LA International Wine & Spirits Competition and a Bronze medal in an Orange County Competition. 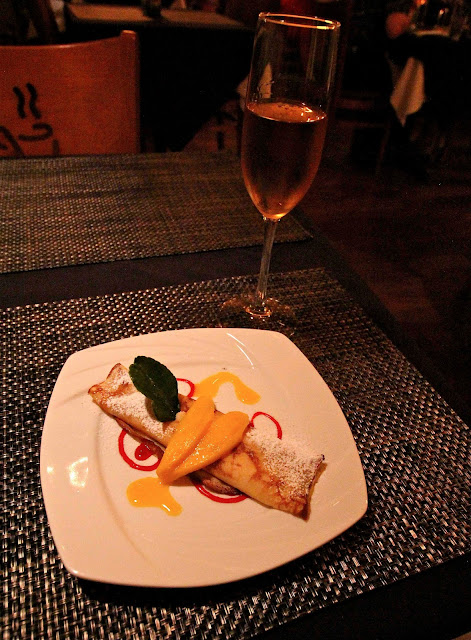 What? Mango Crepes with White Port? I've never heard of this type of pairing, or of White Port, for that matter. The dessert course was an exotic, sweet mango on top of a delicious crepe, which helped digest the proteins in meat I'd just eaten in the previous course. 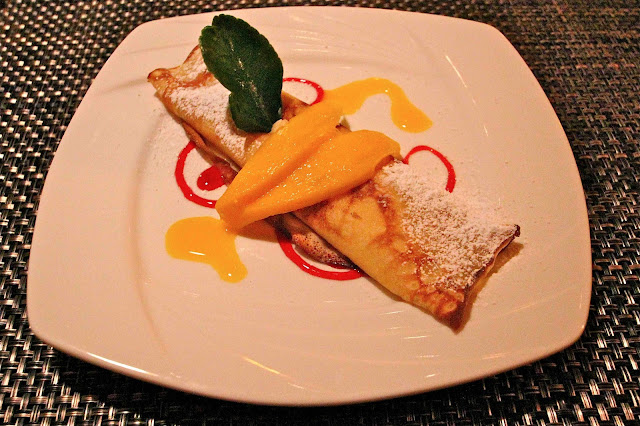 Reyes White Delight is a white port-styled wine with a blend of Chardonnay, Muscat and old vine, dry-farmed Trebbiano. The silver medal winning wine was an interesting pairing that complemented the dessert well.

Luckily, Reyes Winery had bottles of all of these wines available for sale at the end of the evening; so we bought a Reyes 2010 Chardonnay and 2010 Cabernet Sauvignon.

If you're in the Valencia area, check out Thelma's & Luis restaurant, the food is fantastic and they might have their new "Thelma's Blend" wine available. 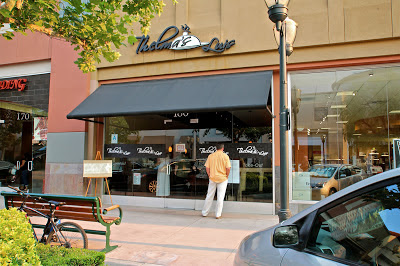 COMMENT BELOW OR EMAIL ME: TasteNTrip@gmail.com
Posted by Gary Coon at Taste N Trip at 1:02 AM